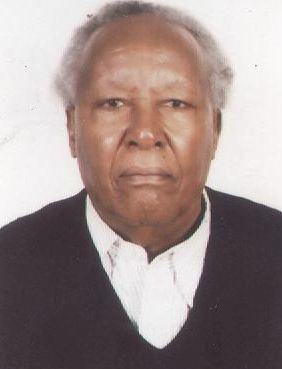 George W. Mathu was a Senior Research Fellow at the Institute of African Studies.  He was born in Kiambu District, Kabete Location in 1940.  He attended early education at Ndunyu Primary School, Kabete and Kirangari Intermediate School.  Later, joined Bata Technical School, Limuru, before admitted at Wasatch Academy, USA for the ‘A’ level studies.  Later, he joined Baker University, Kansa, for his Bachelor of Arts in 1960, with the Joe Wenger’s African Scholarship Award.  He joined the University of Missouri (Graduate School) for his Master of Arts (History) 1968 through a Board of Curator’s student’s Award.

George Mathu was privileged to take a one year teaching assignments at the Lincoln University, Jefferson City, Missouri: USA, before joining the University of Nairobi, as a Resident Tutor and later as a Junior Research Fellows, Institute of African Studies under Prof. B.A. Ogot.

Besides being a Director of African Studies, George Mathu has taught a number of courses at the University of Nairobi, Catholic University, and USIU.  He has participated in several tutorial sessions at the Department of’ History and in the Faculty of Education.  He has been a member of the Dean’s Committee; Senate, and a member of the Kenya Delegation to the UNESCO, and a Kenya Delegation to the 2nd World Black and African Festival of Arts and Culture.

He was a recipient of several grants, awards and scholarships both locally and internationally culminating with a “Distinguished Alumnus” 1979 award (from Wasatch Academy, USA).