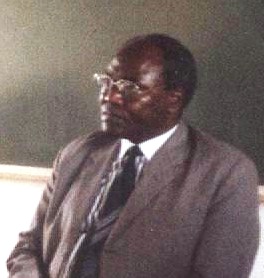 Professor Gideon S. Were was born in Kakamega District, Kenya in 1934.  He attended his early education at Manyala, Kakamega and Maseno Schools in Western Kenya before joining the Royal Technical College of East Africa (now the University of Nairobi) where he did his “A” Level examinations in 1959.  He later studied at the University of Wales for his bachelors and doctoral degrees in 1963 and 1966 respectively.  He also attended the London School of Oriental and African Studies, University of London, from 1963 to 1965.

Professor Were  published numerous scholarly books and  contributed extensively to academic journals and other publications.  Among his best known works are A History of the Abaluyia of Western Kenya (E.A.P.H., 1967), A History of South Africa (Evans Brothers, 1973), East Africa Through a Thousand Years (Co-author with D.A. Wilson, Evans Brothers, 1968), Essays in African Region in Western Kenya (Kenya Literature Bureau, 1978), Leadership and underdevelopment in Africa (G.S. Were Press, 1983).  History, Public Morality and Nation-Building: A Survey of Africa Since Independence (University of Nairobi, 1985).  He is the editor of the Transfrican journal of History and Journal of East African Research and Development.

Prof Were was a Professor of History and Director, Institute of African Studies, at the University of Nairobi.  He was also the Director of the Women Studies Project at the Institute.  He  also served in the  as Dean, Faculty of Arts, and Chairman, Senate Postgraduate Studies Committee at the same institution. He was  the Deputy Principal, College of Humanities and Social Sciences, University of Nairobi.  Professor Were was a Fellow of the Kenya National Academy of Sciences.  He was married with six children.